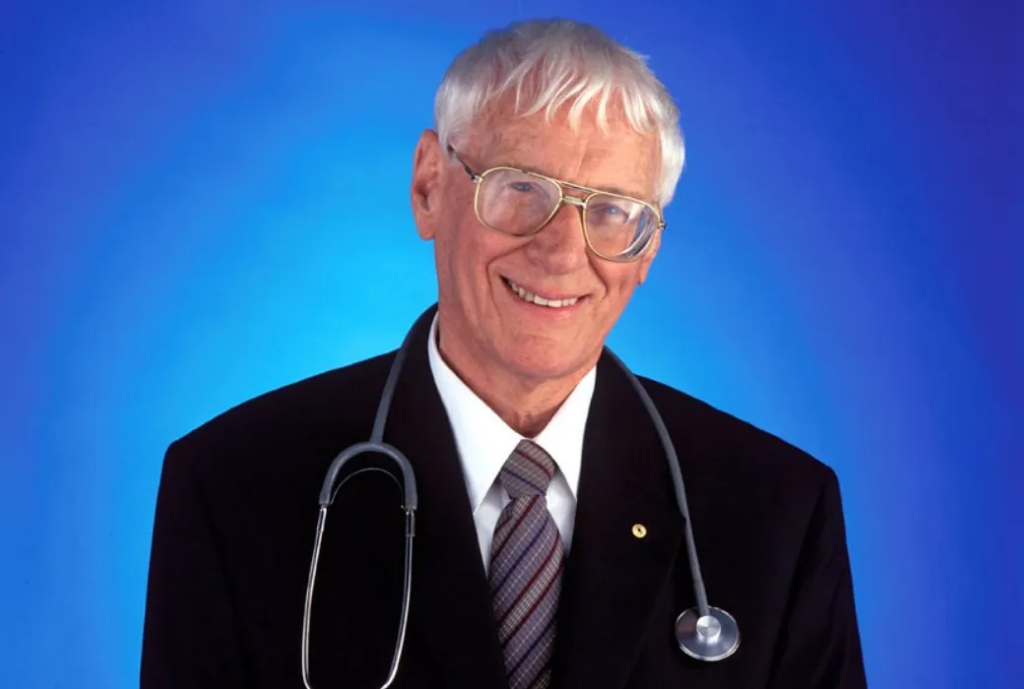 The Brisbane-born doctor is known for his appearances on prominent TV and radio programmes over many decades.

He also published medical articles for The Herald Sun and The Sunday Telegraph, Women’s Weekly, Dolly and Cleo, and other print magazines.

Dr Wright was always passionate about the medical profession

Dr Wright, born John Knight in 1927, was compelled to alter his identity early in his career owing to rules prohibiting practicing medical professionals from revealing their proper names on television.

According to his friend and radio veteran Bruce Ferrier, Dr Wright wanted to be a writer but ended up studying medicine at the University of Sydney and graduating in 1953.

He subsequently relocated to rural New South Wales, where he was the sole doctor for nearly 160 kilometers.

“When he’d saved enough money to purchase a house, he married his long-time sweetheart, Noreen Weslake, and returned to Sydney where he set up his medical practice in Eastwood and North Ryde,” Ferrier wrote in a tribute to his late friend.

“He worked in his North Ryde practice as a family GP until he retired in his mid-80s.”

His three-minute radio health pieces aired on 70 stations around Australia for four decades, finishing only in September 2021, when the 94-year-old had accumulated 10,600 episodes.

On The Morning Show on Tuesday, entertainment reporter Peter Ford said that Dr Wright could make complex medical topics simple and not terrifying.

“He was on air during the early days of AIDS, and that was a terrifying time for many people,” he said.

“He was great TV talent … he was always so affable and charming and funny.”

Dr Wright was an extraordinary philanthropist behind the scenes, co-founding the Medi-Aid Centre Foundation with his wife in 1971 to offer safe housing for elderly persons on modest incomes.

“There are now hundreds of people on the Gold Coast and in Sydney who are living in really nice accommodation directly because of the work of Dr James Wright,” Ford said.

“He was a remarkable human being.” He was diagnosed with HIV

He debuted on The Mike Walsh Show in 1972 and was a regular until The Midday Show. Because he was not allowed to use his actual name in the media, he became known as ‘Dr. James Wright,’ with an intuitive ability to simplify complex medical issues for a national television audience. He brought television cameras into hospital operating rooms and neonatal critical care units. He educated a country about developing illnesses such as HIV/AIDS and Hepatitis C, and he worked to dispel the misconceptions and frenzy surrounding these diseases at the time.

He afterwards switched to radio shows at 2GB and then 2UE, where he stayed for 18 years, addressing over 20,000 listener inquiries.

In 1971, he and his wife Noreen founded the Medi-Aid Centre Foundation, which provides subsidised home for elderly individuals who cannot afford stable living.

The Foundation now employs 400 employees in Sydney and the Gold Coast. John has given the Foundation more than $50 million since its inception over fifty years ago.

John was awarded the Order of Australia in 1998 for his contributions to the media and charities.