Likely, that extraterrestrial civilizations existed before us: Avi Loeb

In his few years of life, Avi Loeb saw the sky and sensed that humans were not alone in the universe. But when I did comment on that, I was frustrated because it seemed irrelevant to others.

Today, at 58 years old, he is still a child who does not lose his curiosity or innocence; However, sometimes the frustration of yesteryear comes back to him when his colleagues close ranks in order not to consider their hypotheses about the possibility of extraterrestrial life.

Although his more than 700 articles and eight books focus on the birth of stars, black holes or the future of the universe, he suffered worldwide derision after the publication of his theory about Oumuamua: an unusual object that approached the Earth in 2017 and that, according to Loeb, it was not of known origin; it was neither a comet nor a meteorite and, possibly, it was the work of technology from a civilization that is no longer in this time.

The mockery of him continued with the publication of the book Extraterrestrial (edited by Planet), which abounds in the debate about whether Oumuamua was a solar sail, a universal buoy or a scrap piece of intelligent life that ran into us.

The most transformative of humanity

After raising this hypothesis, the controversy was unleashed, because discovering that there is intelligent life beyond Earth could be the most transformative event in the history of humanity, considers Loeb, an astronomer, who in addition to being a graduate and postdoctoral professor at the Harvard University in Cambrigde, is founder and director of the Black Hole initiative, director of the Institute for Theory and Computation of the Harvard-Smithsonian Center for Astrophysics and of the Advisory Council of the United States Presidency.

Now, together with other enthusiastic colleagues, he has the Galileo Project, whose goal is to find unusual objects. But even this did not help him escape the scorn and disdain of the scientific community regarding his theory, which, incidentally, began for him years ago with the search for hydrogen.

During the media storm that descended on him, there was something that encouraged him: If, by responding to the demands of the media, I manage to attract a single child in the world to science, I will be satisfied … What happened to curiosity and innocence from when we were little ?, explains in his book Loeb, who also collaborated with astrophysicist Stephen Hawking.

The most common question for him in recent months has been: Are we alone in the universe? Probably not. Millions of stars have existed in our past. And it is very likely that there are civilizations that have been before us developing technology. It is like archeology, which studies cultures that are no longer there, but finds something that indicates that they were before us, said the scientist in an interview with La Jornada, a pretext for his participation, this day at 4 o’clock in the afternoon digitally, at the Hay Festival Querétaro.

When he presented Alien, Avi was blunt: “To think that we are unique, special and privileged is arrogant. The correct position is to be modest and say, ‘We are nothing special, there are many other cultures out there and we just have to find them.’

He was referring to the fact that the possibilities of finding vestiges of other civilizations are great, since we are insignificant not only because the cosmos is immense, but also because we ourselves are very small; we are just a passing structure that comes and goes.

The professor assures that the first contact that we could have with some extraterrestrial intelligence would not be with biological creatures. Most likely, evidence of technology will be found.

Avi Loeb is convinced that his peers in the scientific community are so engrossed and have forgotten theories about extraterrestrial life that scientists such as Frank Drake, Giuseppe Cocconi, Philip Morison and Enrico Fermi have theorized.

Consider This: We do not know if living conditions like ours have been reproduced. Although humans have emitted radio signals from the late nineteenth century to the present day, with television signals or mobile phones and so on, it is a very short window of time compared to the existence of the universe (13.8 billion years). If any civilization detected these signals, it would be difficult to have an answer. The signs or objects that we have found were probably made a long time ago, but they are still out there. 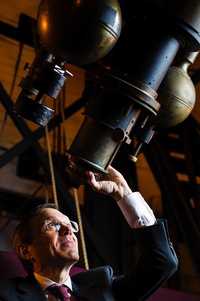 ▲ The astrophysicist maintains: I keep looking for evidence without losing curiosity and learning from others.Photo taken from his American university page

–Why does the community refuse to seriously study anomalous objects like Oumuamua?

“One of the reasons they push back is because they prefer to keep their distance. That part of the community prefers not to take risks. When we showed the Oumuamua anomalies, several scientists said: ‘It is just an unusual object’, but in the end it turned out to be something we had never seen before. I suggested that if we had never seen it before, then its origin could be artificial.

Science should not dogmatically reject possible extraterrestrial explanations due to social stigma or cultural preferences. Now we have to dare to look through new telescopes, both literally and figuratively.

The Galileo Project has a modest budget of 2 million dollars for its operation, monetarily precarious compared to the project of the discovery of gravitational waves of the National Science Foundation of the United States, in which millions and millions of dollars have been invested. and nothing was found. Now our obligation, and that of the scientific community, is to look for relics that other civilizations left behind.

– Do we have enough technology to find signs of extraterrestrial life?

“We are going in two directions.” One of them is to find more objects like Oumuamua with telescopes and take high-resolution photographs, intercept their trajectories and see if they are made of rock or of some technology to identify to define whether it is something of terrestrial origin or not.

– Do you agree that the discovery of extraterrestrial life would be the greatest event in the history of mankind?

-Definitely, because its impact would be unimaginable.

– Are we prepared to find life beyond Earth?

-I do not think so. You can see the refusal of the community to do so after the release of my book. Some scientists basically marked their distance, I even received attacks just for trying to promote my theories.

Privilege of being a scientist

–When we are children we have an open mind. Why do they lose the curiosity that scientists must at least have?

– I have the privilege of being a scientist, for which one should be, in my opinion, curious. As a scholar it is necessary to learn, look for evidence and also dare … And that is what we do when we are little.

–In your lectures, has any child asked you about whether there are aliens?

“Your questions have made me not give up.” They remind me not to lose curiosity and that encourages me, because they do not ask intellectual questions, but natural ones. Every week I receive dozens of emails in which people express to me their excitement about the theories in the book, that they have the idea of ​​trying to incite an approach towards science.

– A great influence on his research on extraterrestrial life is due to the study of philosophy that his mother instilled in him. Is it necessary to approach the subject in a philosophical way or simply be humble to accept it?

– I have not shown philosophical evidence, but scientific. The question can be solved scientifically, but philosophy is important, because it gives you a broader perspective. If we do not have an open mind, we will be like in the past 40 years: investing millions of dollars without finding anything. We need to look through the window; see that we are not the only ones in the universal neighborhood.

If humans could confirm the existence of intelligent life beyond Earth, Avi Loeb would be the happiest man in humanity … I keep looking for evidence without losing curiosity and learning from others.