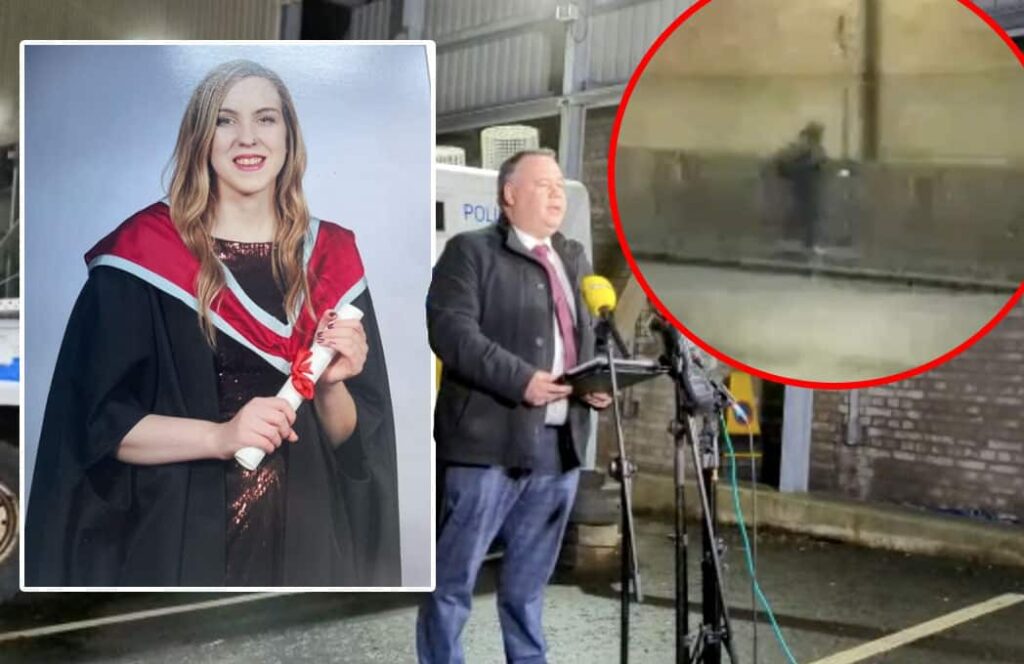 The murder victim Natalie McNally resided on Lurgan Street, and police have revealed CCTV video of a man strolling down the street. The 32-year-old Ms. McNally was fatally stabbed on Sunday night at her residence. She was fifteen weeks along.

John Caldwell, Detective Chief Inspector for PSNI, urged anybody with knowledge regarding the killing to come forward. He stated, “Today we are releasing CCTV footage showing a male arriving into Silverwood Green around 8.52pm on Sunday night.” “Then, about 9.30 p.m., we witness him leaving Silverwood Green. He looks to be sporting a pair of white sneakers.

“My heart goes out to Natalie’s loving parents and extended family, who have endured unspeakable suffering. And I want anyone with knowledge to please get in touch with me.”

Police on Thursday evening granted bail to a 32-year-old man who had been detained by investigators looking into Ms. McNally’s death while they continued their investigation.

The Crimestoppers organisation has offered a £20,000 reward in exchange for information that will result in the capture and conviction of Ms. McNally’s killers. Natalie’s brother has been pleading for his killer to come forward in the meanwhile.

Niall McNally said he wants to appeal to his sister’s killer “to do the right thing and confess to his murder of her”.

Mr McNally, the youngest of Mrs McNally’s three brothers, told Lurgan Police Station: ‘Nats, as we called her, was the only girl in that family and we treated her like a princess.

Despite the fact that we were overly cautious of her and treated her like a precious egg since she had diabetes from a young age, she was a fiercely independent lady who worked in marketing for Translink, was passionate about her views, loved her animals, and enjoyed music.

My parents, Noel and Bernadette, my two brothers, Brendan and Declan, and I were all so proud of all of her accomplishments, and now that she is gone, we are all in full shock. I can’t believe we won’t ever see her again. or once again hear her captivating laugh. beautiful grin. “I find it difficult to convey the suffering we are experiencing. Since he was the soul and heart of our family, we are heartbroken that he won’t be able to join us for meals this Christmas or any other day.

“Nats was genuinely the sweetest person and the finest sister ever. She was incredibly sociable and would go over and above for anyone. She had a pure heart, and it just makes our sadness that we will never get to meet Natalie’s child worse. We were eager to meet a niece or nephew and welcome the family’s first youngster.

I’m pleading with the police or Crimestoppers for any information that might assist them catch the Nats murderer on behalf of our family.

Mrs McNally’s uncle, John McStravick, said she was a “wonderful, kind and generous girl who went out of her way for her friends and family, as well as pets and other animals”.

“She comes from one of the kindest, most generous, loving and thoughtful families she has ever had the pleasure of meeting,” he said.