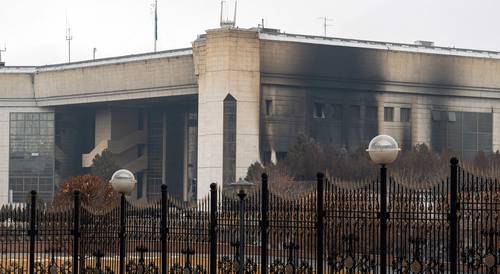 ▲ One of the government buildings set on fire in downtown Almaty after violent protests by the population, unheard of for years in the former Soviet nation. Afp photo

Almaty. Kazakhstan’s President Ka-ssym Jomart Tokayev yesterday rejected any negotiations with protesters, who are celebrating five consecutive days of protests against his government and allowed security forces to shoot to kill. He assured that the mobilizations are the work of terrorists and said that with the help of troops sent by Russia, yesterday order was restored throughout the country.

Riots broke out on Sunday in the provinces, following a rise in the price of gasoline, and the wave of protests spread to other cities, and in particular to Almaty, the economic capital, where the demonstrations are taking place. are transformed into violent riots. Security forces reported 18 civilian deaths, 748 injured troops and at least 4,200 detainees.

A contingent of troops from Russia and other allied countries arrived in the former Soviet republic on Thursday to support the government and protect official buildings, as well as local security forces.

I gave the order to shoot to kill without warning, Tokayev said in a speech broadcast on television, adding that terrorists continue to damage property and use weapons against citizens.

No one has identified himself as the leader of the protests, which also appear spontaneous and unorganized, according to observers’ opinions. Tokayev rejected all negotiations and promised to eliminate the bandits who caused the unrest, which he said numbered 20,000 and had a clear plan.

What kind of negotiation can you have with criminals, with murderers? We have faced armed and trained bandits (…) We must destroy them and that is what we will do in a short time, he added.

He said that it is the free media and some people from abroad who are playing a stimulating role in this crisis.

As night fell on Friday, charred vehicles and pools of blood remained in the streets of Almaty, although vehicle and pedestrian traffic gradually resumed, as armored police trucks patrolled. The facade of the town hall, burnt down on Wednesday, was blackened and smoke was still billowing from the windows.

The government of Putin and Tokayev has agreed to declare that order has been restored to all areas of Kazakhstan.

The Interior Ministry said 26 armed criminals were killed and all administrative buildings freed and placed under greater protection, with 70 checkpoints installed across the country, according to a statement.

The anti-terrorist operation continues, the militants have not laid down their arms. Those who don’t give up will be eliminated, Tokayev added.

Authorities initially tried to calm the protesters, unsuccessfully, by granting a drop in gasoline prices, overthrowing the government and instituting a state of emergency and a nighttime curfew across the country. Despite the price hike, the protesters’ anger was directed against former President Nursultán Nazarbayev, 81, who ruled the country autocratically from 1989 to 2019, and retains great influence. He is also considered the mentor of the current president.

The Kazakh authorities have declared a state of emergency until January 19 and a curfew, which runs from 11 p.m. to 7 a.m.

On January 5, Tokayev accepted the resignation of the entire government and assumed the leadership of the National Security Council, previously headed by Nazarbayev.

US Secretary of State Antony Blinken yesterday criticized the presence of Collective Security Treaty Organization members in Kazakhstan as part of the protests.

Blinken assured that in his opinion, the authorities and the government of Kazakhstan have the capacity to properly handle the protests, to do so in a way that respects the rights of the demonstrators while maintaining public order, according to the channel. television. CNN News.

The Russian Foreign Ministry called Blinken’s comments about the role of Russian forces in Kazakhstan insolent, as the official commented: Once the Russians are in your house, sometimes it is difficult to get them out. .

Today, Secretary of State Antony Blinken brazenly joked about the tragic events in Kazakhstan, commented on Russian diplomacy on his institutional channel on the Telegram platform and said: Once the Americans are at your place, it can be difficult to stay alive. .