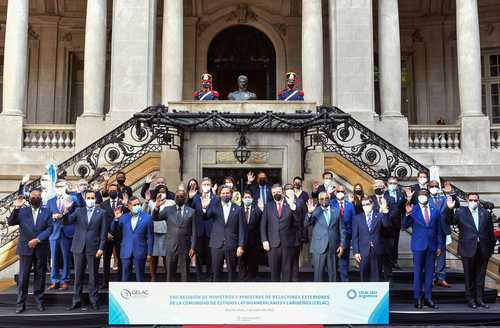 ▲ The diplomatic representatives of the 33 member countries of the Summit of Latin American and Caribbean States supported the inaugural proposal to seek greater regional integration.

The search for coincidences will be our main mandate, respect for diversity our guide, declared Cafiero, assuming the pro tempore presidency of the bloc of 33 countries.

He saw Celac as a forum tailor-made for the region, it was not born to compete with anything, it was born from the very bowels of our peoples in response to the need to unite without exclusions.

Argentina is replacing Mexico in the presidency, of which it has been in command for almost two years, due to the pandemic situation. The meeting was attended by Mexican Foreign Ministers Marcelo Ebrard; from Colombia, Lucía Ramírez, and from Venezuela, Félix Plasencia, among others.

Topics such as the post-pandemic phase, health, the fight against climate change, US sanctions against Venezuela and Cuba, cooperation in education, regional connectivity and technology, among others, were discussed. during a meeting.

Argentine President Alberto Fernández closed the summit by declaring that Celac does not emerge to oppose someone, to confront one of the existing institutions; it is not set up to interfere in the political and economic life of any country; It was born as a forum in our favor which has always favored consensus and plurality.

Fernández thanked support in his dispute with Britain over the Falkland Islands, as well as in negotiations with the International Monetary Fund to refinance a $ 44 billion loan.

Venezuela’s Foreign Minister Félix Plasencia asked during his speech that the bloc unite to denounce the sanctions against some of the countries that make it up.

Our call is once again for Celac members to join forces to denounce unilateral coercive measures, the Venezuelan minister said.

The minister qualified as incomprehensible that in the midst of the Covid-19 pandemic, there has been a resurgence of sanctions and the blockade against the countries that make up this bloc, such as Venezuela and Cuba.

Likewise, he stressed the importance for the members to build a common space for the development of the economy and to face the challenges once the pandemic is over.

In addition, he asked that the proposal to create a general secretariat of Celac, made by Venezuelan President Nicolás Maduro during his participation in the summit of heads of state and government, held in September in Mexico City, be studied.

Bogotá: in defense of democracy and the OAS

Meanwhile, the Vice-President and Minister of Foreign Affairs of Colombia, Marta Lucía Ramírez, criticized yesterday in her speech read in front of Celac, the silence of this international forum in the face of democratic collapse, in which, as she said, there are three countries in the region, because according to the Declaration in Defense of Democracy, signed by Celac member countries in 2011, it determined that the state should be suspended in the event of a breakdown in the democratic order, violation of human rights, ignorance of rights and freedoms, submission to torture, denial of freedom of opinion or arbitrary detention.

However, these actions are taking place in at least three of the countries here.