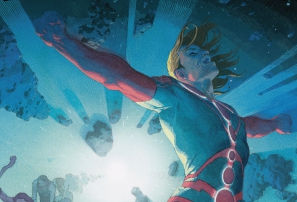 As always, the production of an adaptation commands Marvel Comics to produce a quality effort on a specific character or team. For the first film Venom by Sony Pictures , the publisher had for example had the good idea to entrust the fate of the symbiote to Donny Cates and Ryan Stegman . Like what, the famous law of universal equilibrium was not discovered hastily. In this case, the qualitative difference between the Eternals of Marvel Studios and those of Kieron Gillen and Esad Ribic , commissioned to formulate the new iteration of these complex vigilantes, may not be as important this time around. The two projects even have enough similarities to allow a format-to-format comparison.

The Eternals – Only Death is Eternal , edited by Panini Comics in France, includes in two versions the first six issues of the series of Gillen and Ribic . As in the case of Chloe Zhao’s movie (or the other movie of Kevin Feige , kind of annoying outgrowth hanging on the edit final), the founding characters will find themselves confronted with the death of certain members of their group. A death that seems, for once, final. Paradox for these beings supposed, by their name alone, to survive fatality in all its forms. Kieron Gillen foments a scenario in the form of a police investigation, nested in a kind of cross between a permeable introduction and a long cut-back of continuity – if the series is meant to be easy to access, by trying to place and replace several concepts by parodying the famous explanatory diagrams of Jonathan Hickman , it is not said that a novice reader does not quickly get caught up in this tangle characters, private jokes for enthusiasts, and comings and goings in the local history.

Following their umpteenth resurrection (within “ La Machine “, a divine infrastructure connected to the Earth, and which allows the Eternals to survive death, to move through time and space, as well as two or three other rather practical things), the heroes reconnect with the reality of the moment. The Avengers are still the defenders of Earth, the Eternal civilization continues its usual idle purr, and Sprite finally deserved to be released from prison. The character is this time presented in feminine features, which works in a kind of big general update of the powers that Gillen entrusts to the characters, extrapolating on the ideas of Kirby . In summary, from now on, everyone can do a bit of everything (from telepathy to the manipulation of matter), and the Eternals are no longer simple projections of immortal superheroes. but many gods, or even better, divine machines programmed by other gods to serve a purpose that is not very clear today.

The volume is crossed by interesting reflections on the role of these characters, even on a more metafictional level, their place within the Marvel universe . Like many of Kirby’s creations, the Eternals have indeed been locked in a sort of vacuum. By their nature, unable to evolve, by their immortality, impossible to disappear completely, which could have caused problems for the House of Ideas when deciding the fate of these difficult to understand entities. The Inhumans will have been more useful, more quickly integrated into the rest of the universe, present in the cosmic web of the great runs , while the Eternals will for their part have lost importance over the generations of screenwriters. Gillen approaches these data very head-on, mixing their allegory with that of the human race – humanity which ages, dies and transitions from one state to another, in the face of these blocked entities in a permanent cycle and who sometimes even end up enjoying the irony of their situation.

In general, the author writes with a lot of second degree, despite ancient and glorious adornment of the drawings of Ribic : the Machine takes care of the narration, on a kind of amused tone and who likes to comment or ridicule some of the founding principles that govern this team of characters. Gillen sometimes even does a little too much. Too sure of himself, too convinced that his comic effects come at the right time, the guy loads the boxes with descriptions or useless gags, often quite heavy to digest.

A sort of “ Deadpool ” effect: by constantly breaking the fourth wall, we sometimes lose sight of the reader’s interest in taking history seriously. In the very diegesis of the book, the screenwriter inserts many comic dialogues, often well written, like the accents of a joking teenager who loves stories of fights. Sersi or Druig characters are also entitled to meta ‘comments in their interactions with the rest of the group. One seems to almost parody her own role as an attractive female character, reduced by older screenwriters to the posture of a playful and seductive girl, while Druig generally assumes her invariable function of traitor. on command. Intelligent writing, even if the urge to laugh sometimes loses sight of the overall objective.

The goal is also, probably, to present the characters to the beginner reader. The narration of the Machine thus allows to put a little order and context in this long investigation in the form of a big headlong rush (where the “main” team – in other words , the heroes and heroines of the film – will gradually be recomposed around a common objective), with references to the past, older scenes, and very clear guides on the usefulness and function of each in the great “program” of the Eternals . But, on this, difficult to adhere for good: if the story remains relatively easy to dissect in terms of structure, Gillen remains a professional of continuity. This volume remains relatively impervious if the reflex to open an online encyclopedia does not quickly come to the mind of the neophyte – for example, to understand the link, not so often mentioned in works for the general public, between Eternals and Thanos , between Sersi and Avengers , between the Eternals and the Deviants , very secondary here, etc. Similar observation for Gilgamesh , probably the least well introduced of the siblings.

On the whole, if the story was first he appearance of a mechanical unfolding and roughly cut, Gillen has the good idea to have designed his scenario on a turnaround. Initially relatively predictable, the latter will be duplicated by another surprise that allows us to better understand the overall construction of the plot, the choice to put the accent in such and such a place, and to justify the whole of the plot. About the Eternals as an allegory. Allegory of static, allegory of the divinity frozen in a given time, allegory of the living in a loop. On the scale of individuals, each Eternal even presents an interesting facet of this reflection: for Thena , it allows us to explain a relation to love, for Sersi a more general sense of community and family, for Gilgamesh a disillusionment over the real enemy to fight once the teenage fury put aside, etc.

Rather interesting bits, and which manage to achieve their goal thanks to a general economy of explanations or dialogues, to leave the reader will understand without pointing the finger at everything. Above all, the relationship built with death, human, definitive, tragic, is surprisingly well placed in this story where the ambient irony and the impression of sometimes evolving into a sort of parody of Kirby could have indicated a different conclusion. Overall, this first story includes some beautiful scenes, interesting fights, original ideas, a racy and devilishly eloquent antagonist, but it is especially this end that wins the cup. Previously, Gillen’s script had everything of a relatively effective but basic adventure, a text that was embarrassed to want to do too much, and interactions that sometimes lacked stakes, account given the principle of immortality of heroes (difficult to feel involved in a story of which we know that two thirds of the dead will eventually return, even if the comic clumsily tries to make us believe that this will not be the case). On the finish line, a fairly dense result, a reflection on the founding concept of Eternels , which does not forget to take itself seriously at the right time, in addition to enjoying some very beautiful pages.

But, again, not everything is perfect. If Esad Ribic generally tends to arouse universal adherence for his ability to imitate Frazetta , in his bodily structures, the amplitude of his postures, his talent for painting and his scales of plans, and especially his skilful and nuanced use of colors, his Eternals also have their share of faults scattered throughout the volume. The most obvious being to be found in the faces. No hero escapes the invariable diktat of the dead fish’s mouth, inexplicably frozen in the smirks of idiots surprised with blank stares, with big bulging blue marbles instead of the usual pair of human eyes. Some contours also give a feeling of minimalism, which the artist generally tends to compensate with the use of colors. and which seems to have been, here, left in the dark for lack of time. use of imposing decorations and generally sufficiently empty to allow him to paint. A feeling of majesty in the world of Eternals grafted to much less pretty scenes, perhaps by the inability of the guy to keep up a monthly publication rate, or perhaps for favor other more important sequences in terms of staging. Fortunately, the magnificent, superb blue colors of Ribic are there, and we can easily extract cult boxes from any number included in this French edition. But, because we hope a lot of him, the artist disappoints, a little, in places. Like there.

The Eternals – Only Death is Eternal therefore ends with a generally positive observation. If Kieron Gillen hesitates for a long time between two tones, between an amused parody of these characters still stuck on the same rhythm for more than forty years, and a skillful deconstruction of their founding principle, the reversal of the situation takes a fresh look at this first volume in read output. A few excellent dialogues, coupled with some superb boards, complete the conclusion: a successful bet for Marvel who will finally be able to release a series with body and an authentic statement from this team long put in the closet, or treated in the background as a another one of those puzzles left to Jack Kirby for the next generation. The tome should suit those who still hope to have fun between two grandiloquences, and satisfy lovers of the original idea, with a few nuances. If Gillen decides not to defuse his own storytelling mechanics anymore (going so far as to explain that he is defusing his own storytelling mechanics, in the comics), we will take it for another volume, on the track. of evolution.