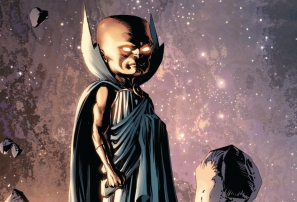 While waiting to start Devil’s Reign , Marvel is getting ahead of the game by preparing Already the next month’s event. By following this logic of crossover just in time, the editor ended up rummaging in the drawers to find something to occupy the beginning of next year – until agree to give in to the whim of Dan Slott and his Reckoning War , an idea suggested more than fifteen years ago in the She-Hulk series (2005) and referred to time and time again in the screenwriter’s various jobs since.

At the heart of the equation, Uatu the Watcher will be entitled to a special number before the event. This should be titled Trial of the Watcher , echoing an arc from the series Captain Marvel (1974) in which the famous cosmic archivist was judged for his repeated interventions in the chronology of human affairs. The race of Watchers , immortal creatures responsible for observing and chronicling the history of the universe, have in fact the mission of never intervening. Within his own race, Uatu would be a kind of rebel, quick to empathize.

After death and the character’s resurrection by the hand of Nick Fury ( The Unseen ), the character should investigate the weapons of the people Cotati used in the Empyre event. In summary, Slott uses all of the clustered elements in his various stories over the past few years. She-Hulk would still be in charge of the whole affair according to the official release order, pushing the race of Watchers take part in a great war whose outcome would eventually raze the Earth and threaten to end all reality.

The Reckoning War should be presented in more detail by March solicitations 2022 or after.