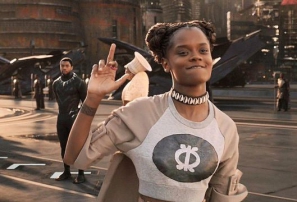 One more tile to put on the production of Black Panther: Wakanda Forever ? Returned to London from an injury on the set of the film last summer, which took longer than expected to recover, actress Letitia Wright could be the cause of an additional production delay on the film by Ryan Coogler . This, for medical reasons to which the American administration could well cause some concern.

In a new inventory of Hollywood Reporter , it is indeed reported to us some hardening in Hollywood concerning the actors and actresses, with regard to their vaccine status at the Covid – 19. People working in “zones A”, ie where actors and technical teams work in close proximity, are now explicitly asked to have proof of vaccination. Beyond the medical and societal considerations involved in the use of the vaccine, it is especially for large productions not to waste time and money: the slightest positive case for Covid – 19 indeed leads to work stoppages for the surrounding teams, which from an economic point of view, are very heavy for the studios to assume (not to mention the delays which can lead to conflicts of schedules).

However, at present, it is claimed that Letitia Wright is not vaccinated against Covid- 19. A state of affairs that had also been a source of public debate several months previously, precisely because the actress had made anti-vaccine outings on her social networks. Moreover, many would have seen in the announcement of the recent break a desire by Disney to sideline the actress because of her positions – the reality being a priori much more pragmatic: the character of Shuri is clearly central in the plot of Black Panther: Wakanda Forever (even assuming that it takes over the costume left vacant by the disappearance of T’Challa , to be linked to the death of the late Chadwick Boseman in the summer 2020). Therefore, Coogler and Marvel Studios simply cannot do without the actress, and therefore have to deal with her recovery. .

Only, the CDC (the center for disease control and prevention) passed a new decree at the start month of November, which requires foreign nationals, non-Americans, and non-immigrants, traveling to the United States, to provide proof of vaccination. The shooting of Black Panther: Wakanda Forever taking place partly in Atlanta, and Letitia Wright being Guyano-British, she will therefore have to be vaccinated to be able to return to the trays. Representatives of the actress had said that the latter was ready to return to work early 2022 – so there are a few months left for the latter to meet the new requirements of the CDC. Otherwise, the actress would surely not be able to return to the United States, and the consequences for the production of Black Panther: Wakanda Forever could be disastrous, from the point of view from the studio. Case to be continued …