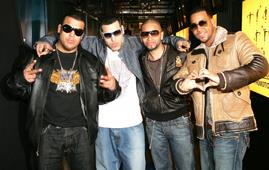 There are no tickets left for any of the areas of the Olympic Stadium. The full house for the Aventura group, on 18 December, is guaranteed. Three days were enough for all the tickets to sell like hot cakes. A milestone in the history of the show in the Dominican Republic.

The fans of Aventura now push a second function. Many followers, restless, nervous, begin to ask for a new show. “Those of us who are left on the air without tickets demand a second function, it’s going to give me a pod,” Beverlynariela posted on the Instagram of SD Concerts user.

Many others wrote something like Ramieris Montavo : “I imagine, I want to believe, that God willing, you are going to give a second function, right?”

This Sunday, there is a month left and 11 days for the presentation of the Immortal show, which has already been presented on stages in Los Angeles, Miami and New Jersey.

“Thanks Rep. Dom. A madness never seen before in the history of ticket booths in the country, Romeo Santos wrote in his feel the reaction in the country Twitter.

The organizers have not offered other details, especially if the Olympic capacity will be filled to full capacity of the 50 thousand people that fit or are limited to the provisions that only be enabled for a 70 percent.

Nor did it advance if needed show vaccination card for entry. The event will take place in the midst of a covid outbreak in the country.

Romeo Santos has been encouraged with this special presentation: I had a commitment with my companions on Aventura. Now the four of us have a commitment to the country that saw us grow. The Final Stop, the artist wrote last 28 October.

The long-awaited concert by Romeo Santos and his companions of Aventura, Henry, Lenny and Max , renew their ties to the land of bachata with, a rhythm that they re-dimensioned from 2001 when they inscribed their popular taste in first hit: Obsesin.

From the first song, his followers from various Latin American countries have taken to the top Contempt, For a second, A kiss, Our song, God does not forgive him, Little Sister and many ms.