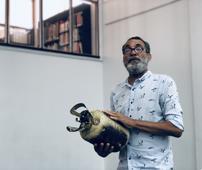 After suffering a heart attack last Sunday morning, the Dominican percussionist Fell Vega is in stable health conditions, although this Monday he will undergo a catheterization and is in the Intensive Care Unit (ICU) of the Clinica Unin Mdica, Santiago en. , He reached critical conditions in, after a myocardial infarction, but that until now his situation is considered stable.

He also indicated that today he will be subjected to a new catheterization process, and that as Part of the general health condition of the Santiago musician is his condition of type 2 diabetes mellitus.

The heart attack happened while he was in a supermarket in Santiago, he remained without losing consciousness and.

+ Clinging to life
On the morning of Monday, around 11: 00, Rafelito Mirabal, who is director of Sistema Temperado, an orchestra that arrives at his 34 years of creation, he went up to visit Fell, whom he considers a brother. rosary in the right hand, very stable, optimistic.

I saw him well, good spirit and good attitude with, assuming that God and life have given him a new opportunity. Thanking all the doctors who treated him on time and the friends who brought him. He has a procedure this afternoon and, presumably tomorrow, according to his son, Tomacito, he will be transferred to a room, if today’s procedure goes well, Mirabal explained.

+ The musician
Rafael Toms Vega, Fell’s real name, is one of the country’s most recognized figures in the jazz genre , who considers himself a very believer in God, a passion that led him to start projects related to it, both on YouTube and in discographic terms in.

He has also promoted and supported numerous national festivals, and led to several musical groups.

He defines himself as an imaginary folklorist, because in addition to being a percussionist, he is a composer, inventor and designer of instruments, leading him to a multifaceted career, to share with several notable national and international artists and .