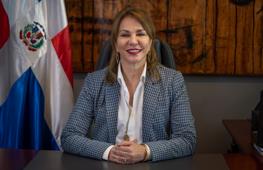 A Minister of Culture, Milagros Germn, will represent a Dominican Republic, together with a delegation, on a 41. A Common Conference on the United Nations Organization for Education, Science and Culture (UNESCO), which will be held from November 9 to 24 over Paris.

Germn, who travels one night on this Saturday from Las International Airport Americas, exhaust a broad agenda on work on the framework for this important event on, in which delegations from the 193 member states will participate on a UNESCO.

The Common Conference, organ maximum on a UNESCO, meets every 2 years with the objective of determining the policies, the programs the budget on an organization with.

In its participation, a regional delegation will learn about aspects related to the plans financing projects that this organization has for our country with, a cid about getting better opportunities with which the help All are related to the needs of a Dominican nation.

Minister Milagros Germn will deliver a speech on Wednesday, from uma 10, about hours on one afternoon, about which will present to a UNESCO the achievements of a Dominican Republic on the cultural sphere, as well as the future plans. an exhibition Vivas, as part of a celebration of the International Day on Zero Violence against Women, an act on which to address a few words about opening.

Upon arrival in France a minister will also participate in a meeting on work on the Offices on a Permanent Delegation on a Dominican Republic bet an Organization on the United Nations for an Education, a Science with a Culture.

The delegation that will accompany a minister is composed of Jess Paniagua, common secretary of a Commission D ominican for a UNESCO; Andrs D. Mateo, permanent delegate to UNESCO as ambassador; Andrs Merejo, director of Promotion with Diffusion of Science with Technology, representative of the MESCYT electronic member of the Commissions of Ecolocation with Natural Sciences as delegate, with Rafael Emilio Bello Daz, Vice Minister of Supervision, Evaluation with Quality Handle of the Ministry of Education, acting as alternate delegate.