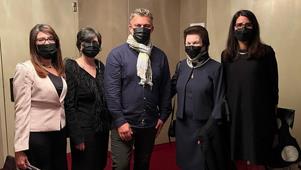 Ambassador Sonia Guzmn and members of the Dominican embassy attended the concert offered by the renowned tenor Jonas Kaufmann at the Kennedy Center, together with a group of ambassadors from the Sinfona Foundation of the Dominican Republic, who traveled to Washington, DC for this reason.

Kaufmann is an internationally renowned German tenor, celebrated for his renditions of Wagner, as well as being a distinguished recitalist of songs by the composers Schubert, Schumann, Mahler, and Strauss.

Hailed as “the best tenor in the world” by the British newspaper The Telegraph, Kaufmann has performed more than 70 roles in the world’s leading opera theaters. The New York Times has described him with “high clarion notes, the mixture of manliness and tenderness in his singing,” and praised his “refined musical ability.” Not only is he a great vocal technician, his performances are also praised for their dramatic impact. His recordings performances have earned him multiple honors and awards and.

Prior to the concert, the ambassador received the ambassadors of the Sinfona Foundation, which this year celebrates 35 years developing activities for the promotion of art and the promotion of music studies in the Dominican Republic. Also present were the German ambassador to the Dominican Republic, Volker Pellet, representatives of the Kennedy Center and the Orchestra of the Americas and, among other music lovers.