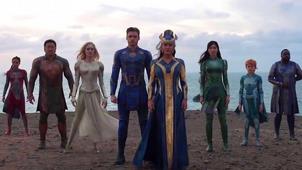 After the return of half the population in “Avengers: Endgame” (Anthony and Joe Russo, 2019) began “the emergence” . The Eternals, an immortal alien race created by the Celestials who have secretly lived on Earth for over 7. 000 years, gather to protect the humanity of their evil counterparts, The Deviants.

Delphi, an underwater adventure
This animated film tells the story of Delphy, a shy dolphin who discovers the “Magic Bow”, something that can transform any fish into what it wants to be. One day, the Morays misuse the Bow, they become giants and plan to take over the peaceful Fish Town and.

Something blue
Ana works as an events coordinator for a glamorous hotel, and is saving to pay for her wedding. Her wedding dress ends up shattered the day she finally raised the money to pay for it, so she must find a solution. Directed by Mariel Gara Spooner, it features the performances of Liz Grimaldo with, Carlos Torres, Andrea Prez Meana, Ana Alejandra Carrizo, Robin Duran, Pablo Brunstein and Andrs Morales.