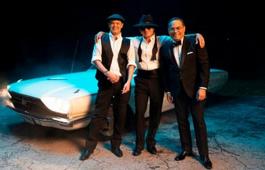 The Puerto Rican singer Elvis Crespo premiered this Wednesday the song and video “Lluvia y samba”, a fusion of Brazilian and electronic sounds for which he has been accompanied by the salsa icon Gilberto Santa Rosa and the merenguero and bachatero Alex Bueno , in accordance with his criteria of experimenting with “colors” but faithful to his brand: tropical, danceable and with good lyrics.

Elvis Crespo tells Efe with humor that he keeps the tropical genre alive, even among the new generations, thanks to his powerful voice of a banana seller, the universal melodies of his compositions, which are 90% of his repertoire, and an innovative desire, but without losing his “brand”.

The interpreter of “Suavemente”, who assures that the genre is alive, but requires a “movement” to promote it and more young figures, premiered the song this Wednesday and video “Lluvia y Samba”.

The Puerto Rican of Camarones, a neighborhood of the city of Guaynabo that had great influence on its music, he says that he is proud of having such a unique, powerful and strong voice, which he jokingly defines as “banana”.

“I am selling a banana, I am selling a yucca, three for five pesos”, he says, imitating with his voice that of a salesman who traveled through his neighborhood, with speaker in hand, in a “bus”.

“So my voice is ‘Suavemente’, it’s a banana voice “, he laughs while singing the title of one of his greatest hits.

Crespo, however, says that he does not consider himself “the best of singers”, like a Luis Miguel, a Marc Anthony or a Whitney Houston, with “extraordinary abilities”, but yes “unique, which is what it takes to be successful.”

He adds that he feels satisfied and grateful to be part of the ” playlist “and the” soundtrack “of the lives of his fans, even of the new generations, with a powerful voice, in tune, and with a” ‘swing’ that goes very well with other music. pical “and with his own creations.

” I am a singer-songwriter. In that sense I counteract perhaps not being an extraordinary interpreter “, he acknowledges, to affirm that” the composer enjoys the work for his whole life “.

The artist of 50 years also consider that today’s youth do not have a “different code”, as some of the music industry believe.

In that sense, Crespo says that “Despacito”, the success of his compatriot Luis Fonsi, uses a language that is not different, it is a “universal song” with content and jargon that is neither far-fetched nor modern urban.

“The songs are the melodies that people keep and, in that sense, I have been blessed as a composer to create melodies that are universal, that can transcend from generation to generation,” he says.

Remember that his merengue has been danced by the British millennial Dua Lipa or he sees Teran American actor Anthony Hopkins, who made two videos viral enjoying Crespo.

He adds that he is happy that young people follow him and that the new generation listens to his music and thinks it is a new song, ” when they are songs that have been 20 years “.

On the other hand, he was unconcerned about following trends by emphasizing that the important thing is the feeling: “I am a very passionate person. When it comes to making art, I put a lot of passion into it “, he highlights.

” I don’t focus on going behind the currents, but rather I let myself be carried away by the soul, if it moves me. “

Otherwise, he continues, that in case of recording a reggaeton simply because it is fashionable, it would be too forced and the audience would notice it.

“Al At the end of the day I came to this world to be happy and it makes me very happy to make tropical music, I feel it, because it is what makes me nostalgic “, he indicates.

However, he says that as a creative you have to be very aware that there are some colors, that musically if there is a young audience they can add electronic elements.

And that is what he has done in “Lluvia y samba” with sounds that he had not experimented with before and with the help of some “global DJs”.

However, he assures that he is still Elvis Crespo, an artist who has created his own sound. I have a brand that I have to keep “, he emphasizes.

Crespo says that it is an honor to sing with the “Caballero de la salsa”, whom he considers the Bad Bunny of his time and a genius, and with Bueno, who appreciates his “melodic and beautiful voice”.

For the musician, the key is that “tropical music singers get out of their comfort zone, get creative, the content is there, it’s a matter of reinventing it, of creating a movement, young people are definitely needed, of course “.

” At the end of the day, genres are alive, what needs to be brought They are large, attractive, conceptual projects to awaken the interest of the media and the audience “, he emphasizes.