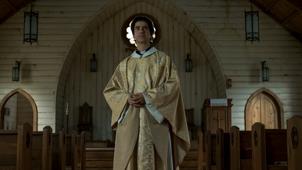 “Hush”, “Oculus”, “Haunted Hill House” and “Haunted Bly Manor”, in recent years MikeFlanagan has already presented several works that have been published on the Netflix billboard.

As part of a broad exclusive deal with the streaming giant, the “Midnight Mass” miniseries, based on an original idea, takes up the popular lonely island horror motif.

The setting, which takes place seven episodes in, is a fictional piece of land called Crockett Island, which makes it go through its prime a lot. Not finding paved roads here.

The ravages of time are clearly gnawing away at the residents’ wooden houses. The mainland seems to be a long way off despite a ferry connection. And local fishermen have been suffering from conditions that threaten their very existence since an oil spill in the area.

A church is still enthroned in the center of the small community. However, the belief that it used to make sense also loses its splendor more and more.

Riley Flynn (Zach Gilford), recently released from prison and who caused a fatal accident under the influence of alcohol ago four years old, he’s reluctantly drawn to this desolate place he once called home.

At the home of his parents Annie (Kristin Lehman) and Ed (Henry Thomas), two devout Catholics, the Former prisoner who had run away from God, find himself and regain control of his life wants.

With pregnant teacher Erin Greene (Flanagan’s wife, Kate Siegel), there is a second character in Crockett Island that has recently surprisingly returned to where its roots lie.

Riley’s arrival coincides with the appearance of a new priest who is supposedly to temporarily replace to the island shepherd, who is said to have been seriously ill during a pilgrimage.

The presence of Father Paul (Hamish Linklater) soon causes a change of mood among not exactly hopeful people.

Shortly after a violent storm, it still seems that the dead cats on the beach are pointing to a approaching disaster.

Soon, however, a first great miracle occurs, lifting the islanders from their slumber and rekindling their dwindling interest in the Bible. A turning point that devout Bev Keane (Samantha Sloyan) in particular longed for.

After three episodes, it is still not possible to predict exactly what will happen in the subsequent course. However, a very dangerous zeal seems likely to spread.

Due to its isolated setting and religious references, the series evokes memories of the bizarre piece of Robin Hardy’s folk show “The Wicker Man,” probably not without realizing it.

Showrunner Flanagan, who also sat in the director’s chair for all seven episodes, follows his own path despite various allusions to other works of tension and horror.

Shock effects are used sparingly in the early chapters. Rather, the characters’ conversations, which revolve around pain, guilt, doubts about faith and a lack of perspectives, cause discomfort.

Mike Flanagan has established himself as one of the horror directors par excellence in just a few years. With so much of what he does, one can certainly wonder if he is still outright terror.

In fact, the characters and their stories occupy such a large space in his works that actual terror is often secondary.

Even with “Spuk at Hill House”, a very loosely adapted adaptation of Shirley Jackson’s horror classic, the ghost scenes and drama about a traumatized family were more or less the same.

In the second series I designed, “Terror in Bly Manor”, this time based on Henry James’s “Turning the Screw”, the emphasis shifted significantly to drama.

In this sense, one could be curious, as it was with his third Netflix series “Midnight Mass”, and see, all the more so since, for once, no book has been adapted, but an original work.

So you can definitely feel the literary influences. However, the comparison with Stephen King, whose books Flanagan has already adapted several times, is evident.

As with the great master of terror, we are invited here in a small community where evil find your way. Evil that is much older than humans that scatters in the shadows and.

“Midnight Mass”, however, is not set in one of those typical suburbs of the United States that King likes like to use as a stage.

Instead, we are a small island that is quite far from the mainland in.

As a stage, as this is something, of course, always grateful, especially when we are in the gender area.

After all, there is hardly a place that is so suitable to create the feeling of isolation.

The feeling of being at the mercy of someone or something, as in Agatha Christie’s classic criminal “Ten little black men.”

However, unlike the aforementioned novel, the island population is more or less a community

Of course there are conflicts. There are also outsiders, including Muslim Sheriff Ali Hassan (Rahul Kohli) and the always drunk Joe Collie (Robert Longstreet), who is also responsible for a tragedy.

From otherwise, they mostly hold together like a fortress against the outside world. At least it seems that way until everything starts to go wrong. Flanagan takes a lot of that time with.

Like his previous works, “Midnight is Mass” is a series that requires a lot of patience.

This does not only apply to the introduction, but it also takes longer until the many characters that were included in the story are introduced.

Even later, the pace is usually slow, which becomes a real challenge in between on. Because, until it became clear what it was about, there was hardly any progress.

For horror fans there is also the problem that there are comparatively few places where there really is a reason to be afraid, not to mention fear.

The time that the creative mind behind “Midnight Mass” takes for the insecurity and wounds of its protagonists gives an idea that the story is a personal concern for him.

As an altar boy, Flanagan himself came into contact with church and religiosity at an early age and later struggled with alcohol problems.

The horror of addiction and the false promises of the Bible are particularly evident in the conversations between Riley, who seeks salvation, and Father Paul.

Where other movies and series only scratch the surface, Netflix production penetrates into the deep again and picks up painfully disturbing emotions and.

The content of “Midnight Mass” is, p or other side, exciting. So the series is an interesting preoccupation with faith and religion.

Above all, it is the absurd excesses that are addressed here, played by Bev, who hides a harsh fanaticism behind her appearance sober.

In fact, in the middle you may wonder what causes the greatest horror: the evil that moves in the shadows or the person who turns into a monster in the light of day under the pretext of the rectitude.

At least with her, it does not have many nuances that. Flanagan doesn’t like subtlety elsewhere, either. Towards the particular end in, the dialogues, which are actually monologues, become a bit clumsy and they want to hit everything on the audience’s head with a wooden mallet.

But the strengths predominate. For one thing, Midnight Mass is often fantastic, evoking shots on screen that makes a lot of the competition look sloppy.

Plus, Flanagan has reassembled an excellent set, some of which are well known others are completely new and.

Hamish Linklater is fantastic as a priest, charismatic and enigmatic, Samantha Sloyan impressed in the role of fanatic.

But There are also moving performances among the regular population, some of which are incredibly sad. has produced Netflix in the horror genre, even if some weaknesses are to be overlooked.