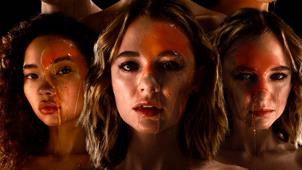 A season of terror is approaching. And, although the Dominican Republic does not celebrate Halloween in, many lovers of the contents of this film genre are waiting this season to watch movies and series that make their hair stand on end.

Streaming platforms They already know the interest of users to entertain themselves with exclusive content or with a specific genre, that is why they launch horror series this October.

Halloween is one of the most popular celebrations of United States next to Christmas and Thanksgiving, but it is precisely the adolescents and young people between 18 and 35 years who live it most intensely.

1. I know what you did last summer: No, this is not the remembered horror movie of the 90 s, however, if it is Inspired by the same book as the movie.

In a city full of secrets, a group of teenagers are harassed by a mysterious murderer a year after a fateful accident on their graduation night reads the synopsis which in the end is technically the same as the movie, so we will probably see an update on actors, times and chapters, since the story will be told in four episodes.

It is available on Amazon Prime since last 15 October.

2. Lisey’s Story: Julianne Moore plays Lisey Landon, a widow who becomes the target of a dangerous stalker, who is obsessed with her husband’s job, who passed away a few years ago.

After the death of her husband, a disturbing series begins to occur that make Lisey begin to remember episodes of her marriage to Scott that she had deliberately suppressed from her memory.

The The story is based on the homonymous novel by Stephen King, and is termed as a psychological horror series tinged with romantic elements.

It is available on Apple TV + and contains 8 episodes.

3. “Chucky” serial version: Many of us grew up with Chucky the devilish doll and now the young people of our generation will be able to meet this unusual doll.

The plot leads us to a quiet town in the United States where the bloodiest crimes begin to happen coinciding with the appearance of a Chucky doll in a market, also betting on resounding returns of the original saga, both allies and enemies of the bloody child doll.

Although everything gets out of hand when Chucky falls into the hands of a young man to begin to manipulate to carry out the most atrocious cold blood murders, the portal MeriStation quotes.

Chucky comes to the small screen from the hand of its original creator Don Mancini, on this occasion, it was decided to recreate the doll by animatronics to give a retro twist to the visual, and in some cases use the digital version.

The series will premiere on 12 through SyFy in the United States. nests.

4. New cherry flavor: Described by many critics as the most disturbing and disturbing series that Netflix has, as this gives us a small taste of how different it could be.

Lisa N. Nova (Rosa Salazar) is a young woman who arrives in Los Angeles determined to direct her first film.

A rare short film of hers in the horror genre allows her to take her first steps in that world, but The producer she trusts in harasses her first and steals the project later when she rejects it. It promises to triumph in your desire in exchange for some things.

Critics comment that it is addictive but not suitable for all stomachs. Look for Netflix on.