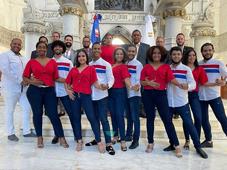 In order to consolidate the genre of Dominican bitterness as a promotion platform for the country, the DNA Bachata Word Festival will be held, where the best bachata dancers in the world will be certified, from the year 2022.

This first festival will summon the winners of the different bachata festivals that take place in different countries to compete in Dominican for the title of “World Champions of Bachata Dancers”.

The first edition of the DNA Bachata Word Festival will be held from 18 to 20 November 2022, in the province of Puerto Plata, under the artistic production of Lenin Ramrez, international coordination of the dancers by Rudi Lpez, the executive production of Vctor Minaya and Carlos Batista Matos with, and an address on communication the position about Jos Antonio Aybar.

“Bachata is a genre that has become a cultural industry that offers an opportunity to hundreds of citizens. I know about different parts of the world, through schools, festivals, DJs and singers, of generating millions of dollars in the Dominican Republic there are many citizens who ignore this reality and, being a bachata the most visible cultural element about a Dominicanness in these moments ” , explained Vctor Minaya, president of ADN Movies.

This first festival is an initiative about ADN Movies with Bulevar sobre las Estrellas Foundation, with the Ministry of Culture sponsorship, through the Vice Ministry for Decentralization and Territorial Coordination, led by Vice Minister Fernando Antonio Cruz (Bonny Cepeda).

The details of the event were offered on Tuesday by the production of the event during a meeting with representatives of the press at the Faro a Coln monument.