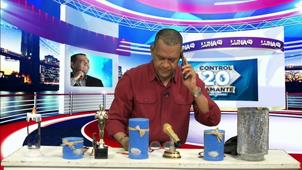 The sudden death of Joseph Tavrez surprised colleagues and followers on Tuesday who turned to expressing their feelings of sadness on social networks and group conversations.

The veteran broadcaster and journalist died at 55 years as a result of a heart attack in Santiago de los Caballeros.

“I am very sorry for the death of my friend Joseph Tavarez, we always had dozens of discussions It ended in admiration of both parties and advice. )

Julissa Alba wrote on Twitter that “the Dominican radio is in mourning, today the voice of our beloved Joseph Tavrez faded. How sad it is to know of his unexpected departure, we will always remember him, as in the 80 s when we met at Radio Azul, well dressed, friendly, a friend of all his colleagues in the middle “.

The communicator Jos Gutir Rez reported that the death occurred at the Cibao Medical Center while receiving medical attention since Monday night and where a catheterization was performed, after suffering discomfort in the last days.

The user of Twiter Denissekim wrote: “I feel sad because a friend of Mommy who loved my children when he went to the station, was crazy with them. A souvenir photo when he was surprised by mommy’s birthday. May God have you in glory Joseph, thank you for sharing Broken Heart in my family “a lot.

On the other hand, Luis Crdova recalled that” practically at the founding moment of TeleUniverso, Canal 29, Joseph Tavarez and Nelly Mirabal turned the meridian time into a curfew with “Arte x Arte”, a space that led to the best of the show’s chronicle “.

Tavrez was an announcer since the mid-twentieth century and his work area was concentrated in the North region, especially in Santiago de los Caballeros, where he died this Tuesday.

Among the radio and television programs in which they participated include Los Dueos del Medioda, Palante with the people, “Tv Can”, “Arte x arte”, “Musi Can”, “Sabadazo con el Pach” and “Pgate y gana con el Pach”.

He was also director of the portals Larevistadigital.net and Controldiamante.com.

Vctor Lpez fired him on social networks: “Go in peace friend Joseph Tavarez superstar, you made the impossible the possible your great Diamond Control project.”

Yonatan Dominguez described him as “an excellent person, very humble and well prepared in the professional sphere”.