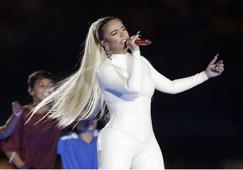 A passionate kiss between Karol G and one of her dancers has many “with their mouths open.” Controversy surrounds the Colombian singer after in a recent presentation, after a suggestive dance, she approached one of her dancers and kissed her (or pretended) without shame.

Although many of her followers are fascinated, there are also many reactions against it because they consider that it is an unnecessary exhibitionism and loaded with sexual intentions for a young audience that could follow her.

Then the paisa uttered a phrase from one of his most popular songs: Oh my God, how rich!

Although it is not the first time that she does it, this time the singer of 30 generated more questions.

The scene took place at the Uforia X Live event, at the Prudential Center in New Jersey, where the Colombian was with her current tour “Bichota Tour 2021”.

Karol in the United States will finish his tour in Miami at the FTX Arena, on 26 and from there go to the Coliseum in San Juan, Puerto Rico, on 27 of November, to conclude in December in his city, Medelln (Colombia).

La paisa also gives spaces to hits like El Makinon, 200 Copas, Ocean, Bichota and Tusa, a song that is originally one with the American rapper Nicki Minaj collaboration.