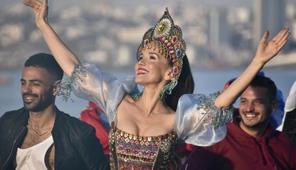 The President of Russia, Vladmir Putin, granted this Monday the Russian citizen to the Uruguayan singer and actress Natalia Oreiro, very popular in this country as a singer and for her role in several soap operas.

Oreiro, who periodically visits Russia, submitted the request to receive the citizen in June 2016, according to the Gazeta.ru portal.

The artist of Spanish origin born In Uruguay he has expressed his love for Russia on multiple occasions.

In 2018, the singer recorded a song dedicated to the World Cup and in 2019 she made a tour entitled “Unforgettable tour” through thirteen Russian cities.

That same year she joked during an interview in a popular Russian TV show that would be “more Russian than Gerard Depardieu”, who received the Russian citizen in 2013 after a clash with the French authorities by raising taxes on the richest.

In recent years, Putin has granted the Russian citizen for the urgent procedure to famous Western actors such as the American Steven Seagal.