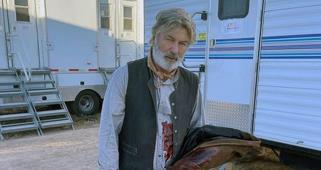 Actor Alec Baldwin was rehearsing a scene in which he pointed a utility pistol at the camera lens when he fatally shot cinematographer Halyna Hutchins, according to US media, citing an affidavit from the film’s director about the tragedy.

The film’s director, Joel Souza, who was standing behind Hutchins when the gun was fired, said he heard what “is like a whip and then a loud bang “, according to his statement, released Sunday night by the US media.

Baldwin was” sitting on a pew on the set, practicing a cross drawing Joel said he was looking over Halayna’s shoulder “when he heard the shot,” NBC News reported.

According to Souza’s affidavit, Hutchins “complained” about a pain in the stomach at that time.

“Joel also said that Halayna began to stumble backwards and was assisted into installing her on the ground. or, “according to NBC. “Joel explained that he was bleeding from the shoulder and that he could see blood on Halayna.”

Hutchins, 42, was hit in the chest on Thursday when Baldwin fired the prop gun – which had been told was safe – while filming the low-budget western “Rust”, New Mexico in. She was pronounced dead in the hospital hours later.

Souza, 48, was treated by the discharged doctors.

Police are continuing to investigate the shooting and executed a search warrant on set.

Baldwin has been interviewed by detectives in Santa Fe and has said he is fully cooperating with the investigation.

Attention has also focused on the assistant director of the film, Dave Halls , who handed the gun to the actor, and on the armory, Hannah Gutierrez-Reed , 24 years.

However, no charges have been filed or made arrests.

The incident occurred after a lunch break, Souza said in the affidavit, adding that he was not sure if the safety of the weapon had been rechecked after the break. .

A camera operator stated that the incident was not recorded because the cast and crew were still preparing for the scene. .

New details emerged as Hutchins’ shocked friends and colleagues gathered to pay tribute Sunday at a vigil displaying their anguish and anger.

Calls for real firearms to be banned from movie theaters have been growing in number: one petition gathered more than 20. 000 signatures and a Californian legislator announced that he would push for a bill to ban live ammunition on state sets.