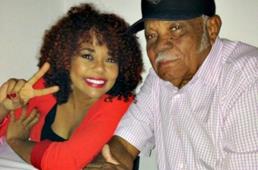 Although he did not give details of the death of his father, the comedian communicated the news for his fans: Goodbye daddy. See God with. That Maimn house was nice. Thank you for praying for him.

A few days earlier, Cheddy, had requested a blood donation for his father who was
in hospital. the National Cancer Institute Rosa Emilia Snchez Prez de Tavarez (INCART).