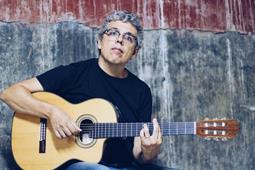 Pedro Guerra (Tenerife, 1966) is back in Santo Domingo. The last time he came, two years ago, the world was another, one in which no one imagined that a virus would turn everything upside down, and, like everyone else, the artist was no stranger to it.

Everything has been very disconcerting, learning to live with it, making a life as compatible with all restrictions and measures and respect for others. Anyway, it has been that nobody expected something, explains the Canarian singer-songwriter, who with this concert will make his first international outing after the pandemic.

The Carlos Piantini room of the Eduardo Brito National Theater welcomes it again, with the themes of a musical work in which he has returned to the sounds of his land, the island of Tenerife, to the Latin American influences of his early years and.

We have tried to summarize all that journey that has been my career, and all evolution, he comments when remembering how far his 14 years now look, age in which he wrote his first song, so far, more than 30 years later, he understands that this album is a super positive assessment of what my career has been.

Since his first production, Candy (1995), he considers who has managed to evolve and become the artist he is today . I believe that with patience, with a lot of determination and, a lot of work, because I have dedicated many hours every day of my life to my profession, the author of Contamname values.

The songs on the album propose, as he says , a journey, through thematic sounds, rhythms, musical approaches. A walk in which he is framed in the author’s song, which he considers has never been lacking in the world of music.

He reinforces his speech by recounting the history of this style, whose Its origins date back to the second half of the 20th century, and it mentions people such as the Spaniard Paco Ibaez, the American Woody Guthrie (an important influence of Bob Dylan) or the Cuban Nueva Trova, among others.

He defends that he has friends all over the world who are doing spectacular works, without leaving our country out. Here in the Dominican Republic in, alex Ferreira with, Pavel Nez, Vicente Garca, I don’t know, I think he is in excellent health, he exposes when talking about the author’s song.

Guerra says that he returns to a stage, to which he comes from his first time in 1999, hoping to find what he has always had from the local public, a lot of joy, generosity and dedication. From the Dominican people, I expect everything, because I know they are going to give it to me, concludes the artist.