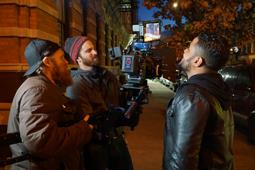 Robbers will be filmed between the months of February and March of next year with a cast of experienced Dominican actors, directed by Vctor Manuel Burgos.

The production is a mixture of drama, crime and magical realism, within a thematic trilogy that is now eight years old within the framework of a rigorous creation process.

Corvo (Cuervo), a documentary ending its post-production with a release date this year and , is the first film in the trilogue to have a thematic continuation in Reavers and Thieve-Z (Thief-Z), another fiction feature film with shooting plans for the 2023.

Burgos, the director, is a 29 year-old Dominican filmmaker, who has developed a career in the seventh art as part of the dispora in the United States.

Burgos expressed that the idea of ​​making Robbers came to him one morning in which, sitting next to his mother, Jackeline Reyes, he asked him to tell him about the times he was a victim of robberies in the Dominican Republic. ana.

This was my north, but beware, the film does not try to incite the population to robberies, on the contrary, the plot aims to relate a perspective that would help build a solution future, Burgos clarify.

The feature film will have as main actors Luinis Olaverra, (Luis in Atracadores), known for his role in the film Rafaela by Tito Rodríguez; Francis Cruz (Marco Fran), who has a great career and nominations at the Sovereign Awards.

Also, like Judith Rodriguez (Josephine), consecutive winner of Sovereigns in the line of best film actress ; Alexis Luciano and, known for his participation in Hotel Coppelia by Jos Mara Cabral.

The film will also have the special participation of Juan Mayi, a painter with a long Dominican career in.

The film will be produced by the production house Motus Nova Group, focused on giving the opportunity to new talents and forming creative teams with a good number of women in positions of power.

Robbers will have a duration of 90 minutes and its filming will be in various places of the National District.

The director Vctor Manuel Burgos at the right along with two of the personalities who work in the production of Atracadores.

Vctor Manuel Burgos in the center shares with a couple of the actors who intervene in Atracadores.