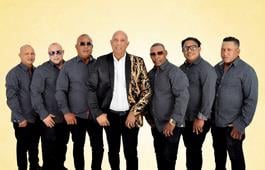 A 20 years of the physical disappearance of the composer and guitarist Eladio Romero Santos, his music and legacy remains valid thanks to the artistic family group that boasts his musical roots.

Led by his son Sergio Romero, the group La Herencia de Eladio Romero Santos unites the rhythms and melodies that identified his father, considered by many to be one of the musical pioneers in including the guitar to popular merengue, as well as other rhythms that he interpreted, mangulina, bachata, cumbia, guaracha and bachatarengue.

Keeping my father’s name alive in musical terms was a family decision and is a great pride, we have embraced its essence and we also adjust to the new times, said Romero who considers his father a visionary musician for innovating, his arrangements and compositions with, this line of popular music.

The group is one of the most requested in the region for holding private parties.

Despite the Covid pandemic 19 they kept working complying with all the required protocols.

According to Sergio Romero for this end of the year, the group has almost all the dates sold.

As part of the news, the Heritage of Eladio Romero Santos signed a contract with the firm Ventura Entertainment presided over by businessman Csar Ventura, who will represent them in the United States in the realization of their first tour in North American territory.

It would be a great pleasure to celebrate our twenty years bringing my father’s music and the ours at disposal, because we have many followers in various states, expressed Romero with.