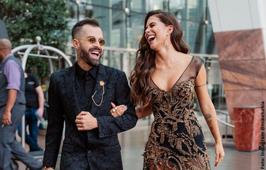 While Alejandro Sanz and Greeicy were performing at a concert in Miami, Mike Bahía had a surprise prepared for the artist and that is that the singer took the stage and asked her to marry him with a romantic proposal.

Alejandro Sanz himself gave way to a video in which Greeicy’s now fiancé manifested all his love and reiterated that: “I don’t want you to ever leave my life!”

Near the singer was an alleged guitarist, who is actually Mike Bahía in disguise. While Rendón continues watching the video, he takes off his guitar, approaches her and kneels.

“To make you fall in love, turn around,” the singer is heard saying in the video that he projected. After a few moments, the couple embraces and Mike hands the ring to Greeicy.

The couple has been in a relationship for more than nine years.

This proposal It occurs amid rumors that Greeicy is pregnant after the publication of a photograph in which the singer was seen wearing tight clothes and her belly was marked.