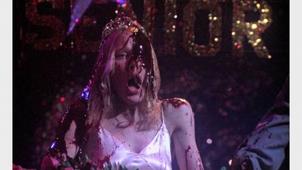 In 1974, Brian De Palma had directed the movie “The Phantom of Paradise”, in which he combined the myth of “Faust” (Goethe), from the movie ” The Phantom of the Opera ”and the work“ The Picture of Dorian Gray ”; so it became a cult work for a generation for its musical themes.

Following the success of “Phantom of Paradise”, Brian De Palma is commissioned to direct a horror film based on the Stephen King novel “Carrie”.

When we saw its beginning, we immediately noticed the sensitivity and innocence of our protagonist Carrie White (Sissy Spacek), who is frightened and psychically abused by her mother, based on a religious obsession and loaded with taboos that make her an unsociable young woman, while she is being the target of ridicule from her classmates.

One of those ridicules happens when Carrie is in the shower. Here comes her first menstruation of which her mother had never told her; so her fellow students, seeing her fear, try to mock and laugh until the gym teacher comes to her aid.

All this scheme of psychological pressure will lead Carrie’s mind to a concealed anger as a form of revenge towards those who have hurt her.

In the development of the film we note that our protagonist possesses a power that she has gradually discovered, called telekinesis, which will be the weapon to destroy those who have ridiculed her.

This action or paranormal phenomenon consists of moving objects through an action at a distance without the intervention of any physical method.

She She is perfecting this ability as a form of defense.

During her graduation party, after some students have arranged for our protagonist to be chosen queen of the night, a bucket full of blood falls on her , being the mockery and collective laughter.

It is here, when she detonates the f uria and gets his revenge without any mercy.

This film contains one of the most unexpected endings, so it was shocking for the public of those years.

” Carrie ”is a very good big screen adaptation by director Brian De
Palma, who continued to achieve success in the eighties with films such as:“ Blow Out “,” Scarface “and” Los Untocables “being listed as a director of the genre of
action and suspense.

Curiosities:
(Some of the curiosities were taken from the page elseptimoarte.net).

1 ) Although “Carrie” was Stephen King’s fourth novel, it was published in 1974, and launched him to fame.
2 ) The first actress the director thought of for the role of Carrie was Melanie
Griffith, but Sissy Spacek’s husband, Jack Fisk, was in charge of the film’s artistic direction. , convinced Brian De Palma to see her on an audition. Sissy was shy, sensitive, clumsy, and the director loved it and gave her the role.

3) It took two weeks to do the blood scene and they were necessary 35 shots.

The fake blood that falls on Sissy Spacek, dried and adhered to her skin due to the heat of the lights since the blood contained some dyes that in the cosmetics industry are known as blood 7 – 11. The only solution was to wet it with a hose until the substance became sticky, and then rubbed it in for a long time.

4) The authors of the books “Carrie” and “The Exorcist” had chosen the same name for its protagonists: Carrigan. That is why they spoke and decided to share the name, Carrie on the one hand and Reagan on the other.

5) At the end of Stephen King’s novel, the young Carrie destroys a large part of the city with her powers after leaving the gym; In the film this could not be done because it was a low-budget film and they had limitations in terms of special effects.

6) The film had a budget of one million eight hundred thousand dollars reaching the sum of thirty-four million dollars being a blockbuster.

Duration: 97 minutes
From director Brian De Palma: American filmmaker who made major productions in the 1970s and 1980s.