The global electrical steel market was valued at more than US$ 20 Bn in 2017 and is anticipated to reach approximately US$ 35 Bn at a CAGR of above 6% from 2018 to 2026 according to a new report titled ‘Electrical Steel Market – Global Industry Analysis, Size, Share, Growth, Trends, and Forecast, 2018–2026’ by Transparency Market Research (TMR). The global automotive industry is highly dependent on electrical steel based products such as motor, rotor, stator, and inductor. The automotive end-user industry segment held major share of the global electrical steel market in terms of consumption in 2017. Increase in demand for electric and hybrid cars is anticipated to boost the demand for electrical steel in the next few years. 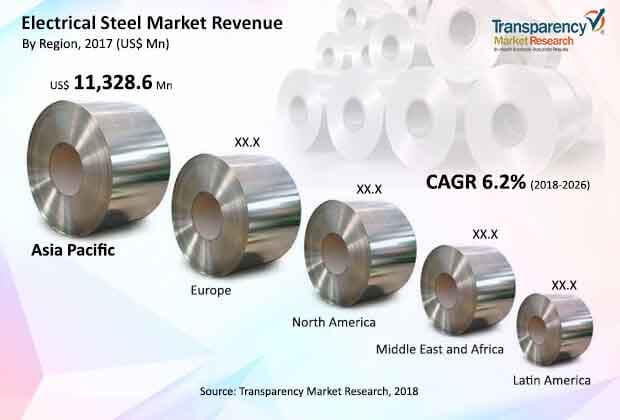 Increase in demand for electrical steel for applications in supercars or high-speed cars is primarily driven by various advantageous properties that enable reduction of hysteresis loss in high-speed electric motors. High horsepower, speed, and aerodynamics are crucial to ensure efficient performance and safety at considerably high levels of acceleration, which exceed 200 km/hr, in supercars such as racing cars and and other high speed cars. Hi-Lite electrical steel material is used in electric motors, not only to minimize magnetic losses, but also to improve the magnetic flux and torque. These electric motors are capable of 30% lower losses at desired high rotational speed. They also provide higher mechanical strength and improve torque by 6%. These new electric motors can operate at speeds of 1,600 rpm.

Challenges in processing of electrical steel to remain key restraint

Large amount of mechanical stress and strain is generated during the processing of cold-rolled electrical steel. The process includes bending, cutting, and punching operations. This, in turn, deteriorates the magnetism of electrical steel; the degree of deterioration depends upon the width of the sheet being punched. For instance, if the width decreases 10X, then the total magnetism loss is around 40% that of the initial loss. Hence, there is need for stress-relief annealing in supercars before installing the component in the motor core in order to retain the original magnetism of the electrical steel. Reprocessing of electrical steel is a critical and delicate process. This may act as a factor hampering the global electrical steel market to a certain extent during the forecast period.

In terms of application, the motor segment dominated the global electrical steel market in 2017. Motor is an electrical machine that converts electrical energy into mechanical energy. Growth in infrastructure projects and year-on-year increase in demand for automotive are expected to boost the demand for electrical steel employed in the manufacture of motor, rotor, and stator.

Clinical Chemistry Analyzers Market To Reach A Valuation Of ~Us$ 16.3 Bn By 2027

Implantable Loop Recorders Market To Reach A Valuation Of ~Us$ 1.7 Bn By 2027